The title of this post has two meanings. First, when I start a project and show it to you here on MFS, I should finish it up and show “after” pics before you forget about it altogether–which, thanks to the miracle of Memorial Day, I actually did!

Second bringing poor, abused pieces of furniture into my house and making them look like they were meant to: after a couple hours’ worth of TLC, this sad coffee table looks much, much, better–more than the $20 (0r was it $10?) we spent for it Sunday at Goodwill!

Naturally, some things didn’t disappear–like that giant water ring, but look at that wood shine! It’s much, much, much better. This took 4 applications of Watco Teak Oil–look how gorgeous it is! Now for a shot of it in the living room… 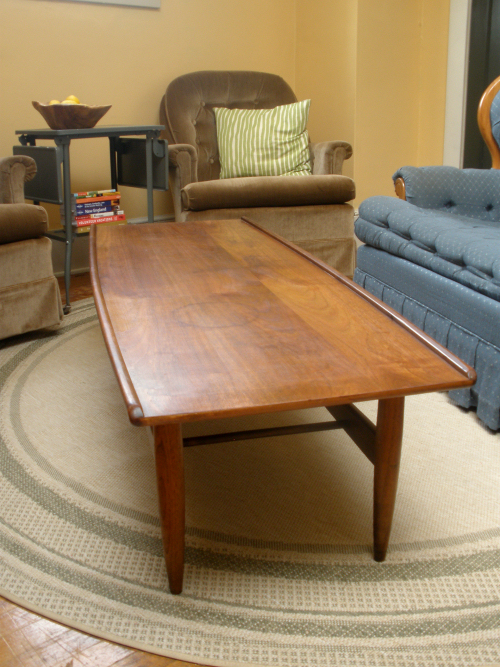 It doesn’t go with the couch we currently have in here AT ALL, but I should be getting a MCM style vintage couch from my grandma’s in Illinois soon! This will look KILLER with that.

Alas, for now, we put the black coffee table back into place temporarily so it will be a more dramatic change when the couch and table both debut to the public together.