It doesn’t have to be rock climbing, white water rafting, or visiting a foreign country.

I went home for lunch, as I do every day. I have the same routine: pull in the driveway, head inside, plunk down purse and keys, let Mosey out of his kennel into the backyard.

Today, I pulled in the driveway, and a cute little black and white face peeked out at me from behind the rolled up hose, and a smiling dog approached my car. He stared at me through my window as I shut the car off. Once I stepped out, he got nervous and ran around to the far side of the house. Clearly curious, he came back with minimal coaching on my part. He sweetly continued to sniff around the yard, obviously interested in the dogs that have gone before him. I checked his collar for his name–Dib–and got the phone number of his family.

He was so friendly! It didn’t take a lot of effort to lead him to my backyard where he’d be safe and sound until his owner came for him. I called, she was home, and told me where the little guy had wandered from. It was several blocks away, and to get to my house he had to have crossed the busiest street in town! He was on an adventure, and so was I. I headed inside to get my own dog–knowing he still needed to go outside. I took him out on a leash and let him sniff the new guy through the chain-link fence, of course I knew that Mosey would like him, but not all dogs like his high-energy friendliness, so I kept them apart. Mosey was quite miffed that I didn’t let him run and play with his new friend.

About this time, a silver mini-van pulled up, and the husband of the woman I talked to on the phone got out. Dib got all squirmy and wiggly–very excited to see a familiar face. I let him out of the yard and he jumped into the arms of his owner. The man explained that the little guy had made a jail-break out of their back door, which hadn’t been closed all the way. He seemed a little embarrassed and sheepish that the dog they’d adopted just six months ago had escaped to explore the big wide world. I didn’t even get his name, but I’m glad I could play a starring role in their reunion. Of course, secretly I wanted to keep the sweet little pup. 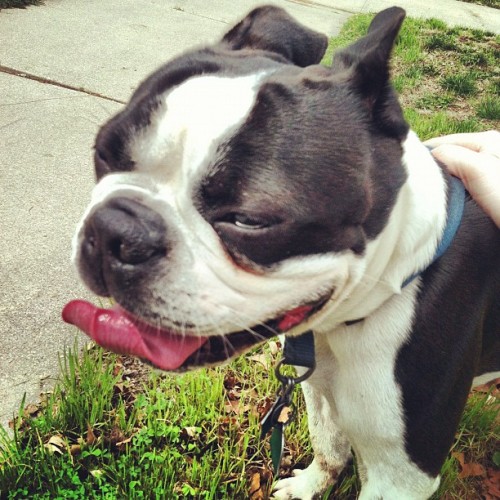 It only took about ten minutes, but my unexpected encounter with this little guy was all I needed to put a smile on my face for the rest of the day.

I’m also more convinced than ever that if we get a second dog, I want it to be like this guy. Can’t you imagine the Abbott and Costello kind of schtick he’d pull with skinny, lanky Mosey?