Hold on to your hats, this is going to be one outrageously exciting post about mulch.

Okay, okay, that’s overstating it. A lot. The truth of the matter is, mulch makes things a lot more attractive, and I was a skeptic until recently. I thought it was just to look pretty, but after reading a surprising number of blog posts on mulch this time of year, I decided we better get on the mulch train! (The ticket for the Mulch Train was only $2.88 a bag, by the way, so I’m on board!)

Supposedly, mulching around your plants is supposed to lock in moisture and keep weeds at bay. Well, the weather is getting hotter so locking in moisture sounds A-OK to me. Weeds? Goodness gracious. I think we have more irritating creeping grass in our flower bed than the flowers that we want in there. As a side note: anyone studying Political Science and wants to know what is really meant by the term “Grass Roots” is welcome to come assist me with yard work. (Cliff’s Notes version: They aren’t deep, but they are made up of a thick, fibrous network, and very, very irritating to pull out.) 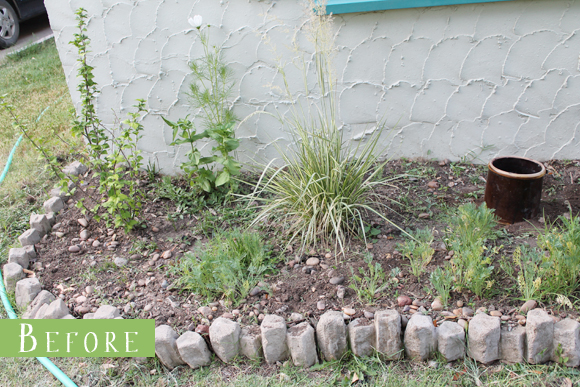 Anyway, after a couple of hours of pulling grass out of the flower bed (once ya get started it’s hard to stop attacking the ugly and annoying weed) we decided to run to Wal-Mart to get a couple bags of mulch. They had two types, cedar (which is what we got) and um, something else (that was much redder in color). Like I said, we got two bags of cedar since we’d only pulled about half of the bed.

We watered the now more-or-less de-grassed soil and the plants before putting the mulch down. There wasn’t a ton of rationale behind it, but since it claimed to lock in moisture we wanted to pre-moisten the area I guess? Then, While I continued to pull out grass around our California Poppies at the front section of the flower bed, Doug started spreading out the mulch. Then we watered again.

It smells fantastic! The red hue makes the plants seem greener than they were before, and my lawn smells like a Home Depot now. I really like it! As soon as we get the whole thing finished (I think we’ll do it on Friday) I’ll share a wide shot of the house and lawn for you. Maybe this infusion of a reddish hue will balance out the terra cotta roof? Mostly, I’ll be interested to see if it really does deter some of the weeds coming up.

Working in a yard is not as intimidating as I originally thought, and I might even miss it if we move into an apartment for our next place. However, I do only get the inspiration in “spurts” and am much more inclined to do it as a “fun” activity and not as an obligation. Maybe I’ll miss it, maybe I won’t. For now, it sure is fun playing in the dirt.

Bonus info: The plants we have growing in the “after” picture are, from left to right, rose of sharon, cosmos and zinnias, (grown from seeds!), pampas grass, an empty pot, elephant leaf (I think that’s what it is and it’s hiding behind the thick clump), another empty pot, and another rose of sharon. The clumps in front are all California poppies.