All weekend I had coffee on the brain. I was playing around with a French press (or cafetiere, as friends abroad call it, according to comments) and a pour over (post coming on Wednesday), but I would be remiss if I didn’t include this little guy in my “Coffee Talk” roundup. 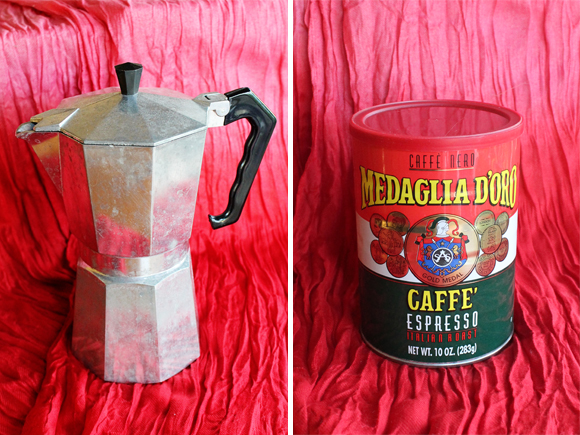 My Bialetti is a trusty little espresso maker. Supposedly, nine out of ten homes in Italy have one of these handy little devices. Sounds like a lofty claim, but I don’t see why it couldn’t be true! Compact and easy to store, it’s a easy way to make espresso. Now, being educated on true espresso as I am (I have to know so I can sell espresso machines at work) I wouldn’t call this a true espresso maker… the water is not forced through the grounds at quite a high enough pressure to get the rich, light-brown “crema” of a real espresso shot. However, it is much richer and stronger than a regular cup of coffee. Served in small portions, it goes well with a scoop of sugar or dab of milk.

To use the aluminum Bialetti is simple–fill the bottom chamber with water, the center funnel with grounds, and screw the pieces together. Sit on a burner–electric and gas will both work… you could even take it camping and set it above a fire. The water will boil in the bottom half forcing water and vapor up through the grounds and into the upper chamber. 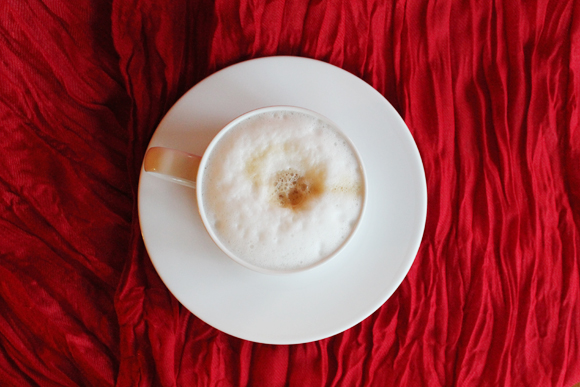 I used a little battery-powered frother to whip up some warm milk and poured my epsresso into it for a yummy latte. You could even sprinkle the foam with cinnamon and brown sugar!

Oh yes, and red is my accent color of the week, thanks to upcoming Valentine’s Day! Is anyone else’s head spinning with Chinese New Year, Mardi Gras, and Valentine’s Day so close together??