YES! I haven’t read a book that pulled me in and kept me turning the pages like this since The Hunger Games. Now, I realize that is a bold statement to make, so I’ll work on backing it up without giving too much away.

There are a few things that I love in books that are all present in Ready Player One, including: 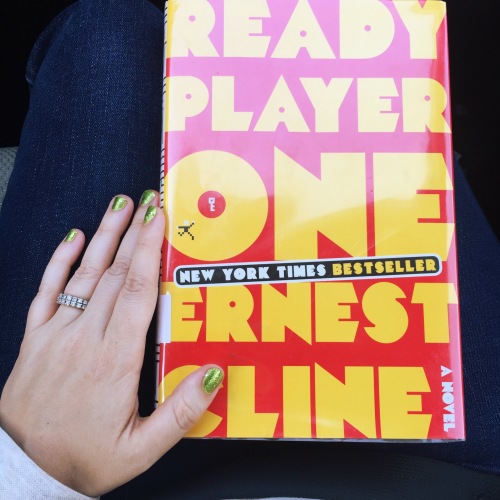 So, the premise of the book is that the world of the future is such a horrible place that everybody spends the majority of their time in a free-to-access virtual reality world called OASIS. This VR world began as a gaming console then expanded to include socializing, school, and shopping. As a result of this, the inventor of the system became the richest man in the world– and also an eccentric hermit. When he dies, he reveals that there is an “easter egg” in the OASIS that will reward the first finder with the whole inheritance. To find the easter egg, it’s like a scavenger hunt with 80s pop culture as the clues. Oh yeah, and video game battles.

I’m not a “gamer”in the way that actual gamers would give me the title, but I’ve had my toe in geek culture enough to really get into this book. I know enough people that have been into D&D and WoW that I get the concept, and I’ve played a fair amount of Final Fantasy in my day. This said, I don’t think that the heavy amount of geek culture and 80s references will come as a roadblock to anyone who tries to read this book—it is accessible even if you don’t get all the “secret language.”

The most compelling part of the plot, and I think many would agree with me, is that the main character, Wade, and his VR best friends (who he’d never met in real life) are essentially racing against a giant corporation whose sole purpose is to find the egg so they can control—and begin charging subscription fees to—OASIS. Especially considering the current political landscape of, well, the world, this theme really grabbed me. As the race to find the egg ramped up, so did my impatience to finish the novel and I stayed up late on many nights to finish it. The themes of us little people vs. large companies, and that of close friends that have never met in the real world, are ones I think a lot of us can connect with in this age where we spend so much time online. Perhaps the OASIS is not as far-fetched as it sounded at first…

I would LOVE to read your reaction. Libby and Stephanie will be posting their reactions too so make sure to find out what they thought! Have you read this or are you planning to? Please leave a comment!

Now, I can announce the June book choice—The Secret Life of Bees by Sue Monk Kidd. This has been on must-read lists for over a decade… Libby and Stephanie and I were talking about how none of us had ever read it. So, by the end of June, I’m sure we’ll all be able to cross it off of our reading list! Please read with us? Join our little club?