Alas, yesterday was my birthday, and the first day of fall, which usually coincide. I’ve been drinking pumpkin spice lattes all September but now it’s official–summer has gone. I’ll pause to let you wipe away a tear.

We recently took Mosey to the dog beach for a few glamour shots to submit to an Italian greyhound-themed 2014 calendar (I think it will be sold as a fundraiser) and thought I’d share some favorites here. Of course, this won’t be our last trip to Dog Beach this year, as the weather will probably stay pretty good for a while (although it is getting chillier) but celebrating our time at the beach seemed like a fitting way to send off my favorite season. 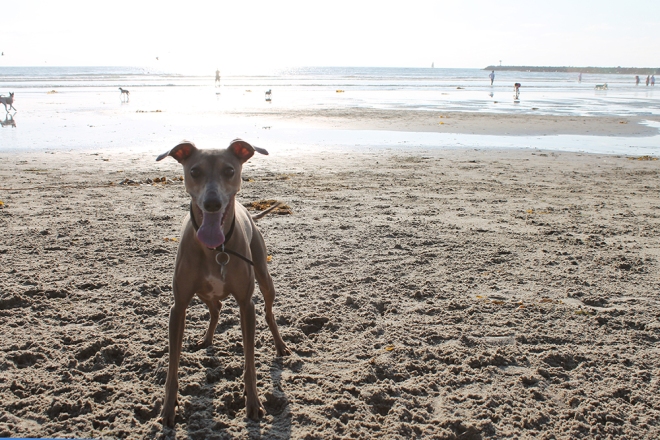 So, now we have been dog owners for two years. Last year I let you glimpse Mosey’s World and this year much of it is the same although in a new place. I am working on a new dog bed for him, though, which I’ll be eager to share as the simplest DIY ever here on the blog in a week or so–stay tuned!

I never thought I would be able to understand a creature from a different species so well. I know Mosey’s idiosyncrasies, like when he really needs to go out versus when he’s faking– when he’s feeling antsy and wants to play, or when he hears another dog outside the apartment and his ears perk up because he wants to meet it.

I remember when we first got Mosey and he was six months old. We were making him sleep in the kennel instead of with us, and I would stay up all night due to his whimpering (he wanted to be in our bed!) I would get into staring matches with him, trying to assert dominance. The stress and adjustment of adding our new family member broke me down into tears on many occasions. What a lifestyle change it was! Doesn’t it sound silly now? It really was a huge step for me as I considered myself his primary caretaker since I am a lighter sleeper (to take him downstairs if he gets up at night) and during the day (Doug worked many more hours than I did). Now I still take him down at night, but Doug and I share duties during the day.

Now that he’s older things are much better. We understand each other, more or less. I think I’ve gotten the hang of being a dog owner and I think he (usually) gives me the respect I deserve–when he can tell my tone of voice means no funny business.

He’s still a brat though, begging at the table and pulling on the leash. He’s not as well trained as he could be but he makes up for it in the morning when we sleep in together and he curls up in the crook of my legs, or when I’m on the couch writing on the laptop and he tucks his head into the crevice behind my back.

I love you, Mosey! I’m so happy to have you in our family!

I love my dog. This I’m sure you know well. With a face like that, how could you not?

However, I don’t want my house to scream “A DOG LIVES HERE!” I feel that his presence pushes the point home more than enough, and I don’t need “dog stuff” strewn all over the house to further prove that my house is a dog house. So, I tuck “Mosey” stuff mostly out of the way. I suppose I would be a terrible parent. Corralling all the kid’s toys into one room or closet and saying “don’t let that stuff come out here and spoil my living room!”

Anyway, in celebration of the fact that as of today, April 16, we have been Mosey’s parents for a whole year, here are some snapshots of Mosey’s World. 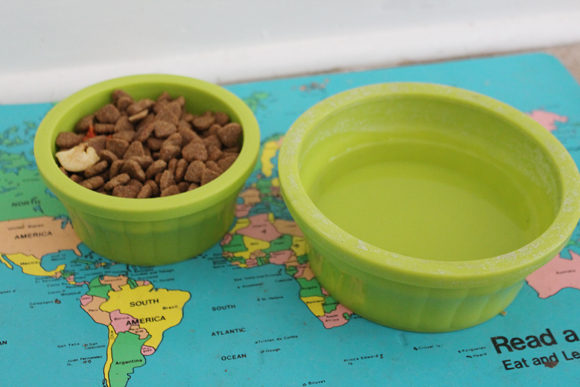 Here’s his food and water, which is in the living room between the fireplace and walkway to the dining room. “They” say not to feed the dog in the kitchen/dining room to discourage begging… but Mosey begs anyway… The placemat is one Doug used growing up :)

We tuck the container of dog food on the kitchen cart (under the waffle maker) next to the oven. He gets a natural/organic blend with no fillers. It has banana chips, peas, carrots, and craisins in additon to the chicken flavored kibble. Sound fancy? It is. He eats better than we do. But since he eats so little, it’s not a huge burden to spring for the better dog food. His food dish is a one-cup portion, it’s easy to just scoop it out with that… no other portioning tools needed. He gets one to two cups a day, depending on how active he’s been lately. He eats more in the summer and less in the winter.

His treats are in this cookie jar, and he definitely knows the “clang” of the metal on the glass means he’s about to get something yummy! (Note: I can not verify the yumminess of the snacks. I have not tried them, but he sure seems to like them.)

Here is his crate “house.” I hate the word crate, sounds so mean, so I call it his house or his kennel. The blanket over the top helped keep the warm air in during the winter… it’s still kind of chilly inside during the day so I’ll leave it on until the weather becomes HOT. The floral pillow inside was a DIY floor cushion that failed, that turned into a dog bed. The red crate on top holds his travel bag (with a few toys, plastic bags, etc for when we take him to Doug’s parents or to the dog park) in addition to two coats (he gets cold in the winter) and old (chewed up) leashes, among other things. The certificate commemorating his graduation from obedience school is on the wall, haha!

It has been a great year with our sweet pup!

Questions? I’ll be happy to answer in the comments!