Time has been flying! Can’t believe I haven’t done a writeup on our quick Portland trip yet. In June we went up to the Portland area to attend the wedding of a good friend (Doug was an attendant). Friday and Saturday were spent in Washington about an hour away, doing wedding stuff. We picked up a rental car which was nice to have freedom, and useful as I actually got to perform tons of wedding prep duties.

We arrived at our friend’s house right across the state line in Washington. The picturesque town was enjoyable, and the weather was beautiful. Rainy, of course, which was expected, but it sure made for some nice light.

Friday night I had the privilege of attending my first bachelor party! Don’t worry, the guys were cool with it. When your close friend is a minister things stay pretty tame and generally involve lots of junk food, and just hanging out and joking around. We went to Portland where we had dinner, and ice cream (Ruby Jewel, I had honey lavender, yum) and stood in line for the famous Voodoo donuts. Pro tip: The line is not that long in the middle of the night! We brought a dozen back for everybody to have the next morning.

Saturday morning, the area was valiantly set up for the wedding, and then it poured. Serious rain for an hour or two. After it cleared up, and the seats were all toweled off, the show went off as planned. It was my handsome hubby’s first time as a groomsman!

And now for the scoop on Portland. The Thursday our plane touched down, we had some extra time to spend in Portland before heading to Washington. We checked in with a high school friend of mine and walked around “Trendy-Third,” 23rd St. We partook in the obligatory Salt and Straw ice cream (so good!) and had lunch at one of the McMenamin’s locations. What a neat concept–the restaurant owner owns dozens of locations and each is customized to the history and style of its building. Love this idea!

Trendy Third was lined with both small local shops and larger ones (like Williams-Sonoma). We walked up and down the length of the main area a few times, mostly talking and catching up, and not doing much shopping. Then, we overstayed our welcome by about 15 minutes and got a parking ticket! Thanks a lot, Portland! That evening we headed to Washington and you just read the recap of that above.

For our first day actually in Portland, we had brunch in the Ace’s restaurant, Clyde Common. The food was delicious but the portions were smaller than anticipated. Actually, this happened to me several times in Portland. Could it be that San Diego’s dynamite restaurant scene has made me piggy? (Spoiler alert: Yes, it has).

Other highlights of day one include spending a lot of time shopping/exploring at Powell’s City of Books and meeting with some other friends for a walk by the river and sushi for dinner.

The second morning was spent walking around the neighborhood and getting Stumptown Coffee and Blue Star donuts for breakfast. I had read online that Blue Star was better than the more famous Voodoo, and I have to agree– I preferred Blue Star. The glaze was tastier (I had lemon poppyseed and Doug had maple bacon) and the body of the donut was lighter and fluffier. 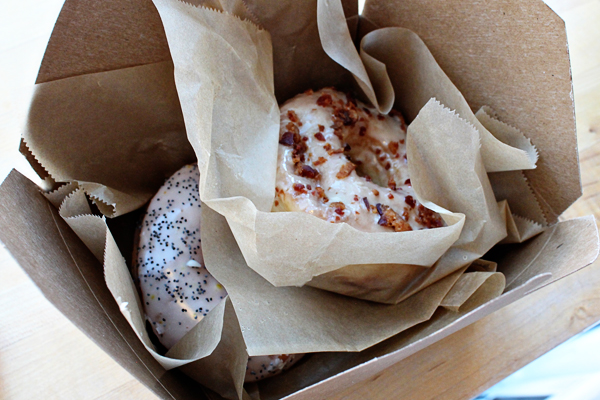 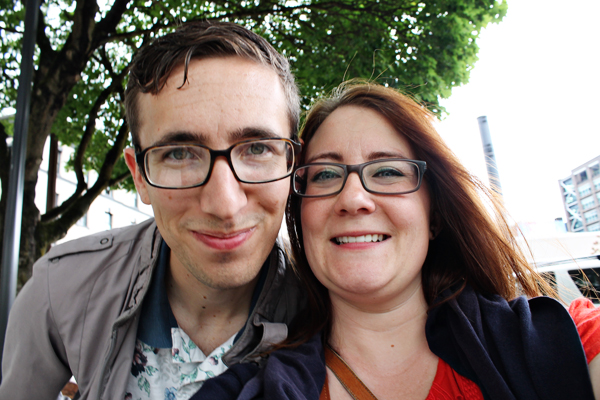 If it seems like most of this write up was about food, then you are correct! We spent lots of time windowshopping but not spending a lot of money (aside from a small pile of books at Powell’s) and we walked, walked, walked, watched a bit of the World Cup, and just enjoyed being off work in an exciting new city.

Come on back Friday for my writeup of the Ace Hotel! I got to check it off of my bucket list!

For more travel, be sure to check out my On The Road posts.

5 thoughts on “Portland: Part One, Things to Do”