Mindy Kaling’s Why Not Me? has got to be one of the best books our little virtual book club could have picked for September. We were coming off a pretty heavy book in August and we were trying to ease from summer to fall. At the beginning of the month my sister and I took a short girls’ trip to Phoenix which is about five hours from San Diego. I signed up for Audible

, cashed in one of the two free books offered, and we listened to Mindy the whole way there.

I downloaded the book at home and streamed it to my car using my Kindle Fire and bluetooth connection.

Mindy’s style was just like having another gal pal in the car with us. I loved the insider peek on Hollywood hair and makeup and even hearing about some of the more mundane parts of her dating life, like an “are we or aren’t we” saga with a long distance guy (okay, it wasn’t totally mundane—he was an aid to President Obama). I read Mindy’s first book Is Everyone Hanging Out Without Me a couple of years ago (and lent it out—if you are reading this and you have my book, give it back!) …I was happy that her second book retained the same chipper writing style and that there were lots of new things for her to say, despite the books being released relatively close together.

The final part of her book where she tackles being a role model for women of color and women with a non-Hollywood body type was encouraging to me and pushed me to work harder to achieve my goals. In the past, she famously said that she didn’t want the responsibility to speak for minorities in Hollywood, but the last chapter made me feel that she is coming around to her undeniable role. One theme that has persisted through both of her works is that if you want to achieve something, you must work at it tirelessly. It will not be handed to you. If Mindy didn’t have her characteristic drive, she would be your funny friend at work, not a writer-producer-star of her own TV show. I’ve read a few inspirational female books lately including #GIRLBOSS, but this Mindy, using humor, comes across as more authentic which owes a lot to Mindy’s writing style and, well, her narration since I was listening to an audiobook.

Serindipitous timing—Why Not Me was released as a paperback just yesterday! I really do recommend it.

For October, something a little creepier. We’re going to be reading The Graveyard Book by Neil Gaiman. According to the first half of the wikipedia article (I didn’t want to go too far and read spoilers) the book is about a boy who is raised by graveyard inhabitants. It was compared to The Jungle Book in which a boy is raised by jungle animals. I think this is going to be great! I enjoyed Stardust (another Gaiman book) when I read it about 7 years ago, so I know I’ll like his writing style.

As always, you can check out Libby and Stephanie’s responses to Why Not Me at their respective blogs! And don’t forget to join in the conversation in the comments or on your own blog if you decide you’d like to read along with us.

It’s time for my monthly virtual book club post! After reading my response (or before, that’s fine), hop over to see what Libby and Stephanie thought of this pick. 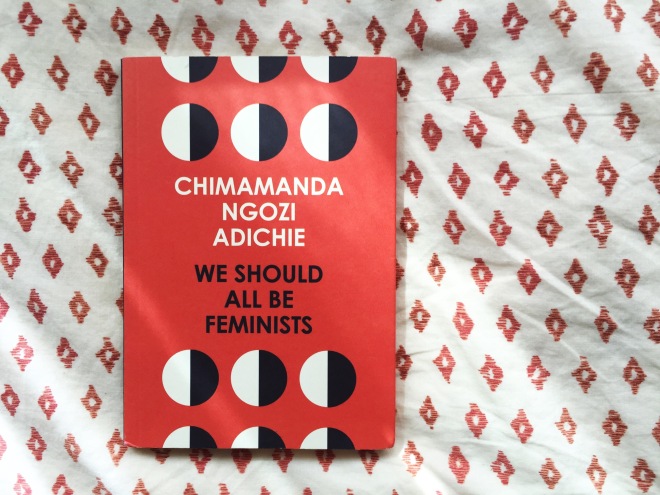 We should all be feminists.

The first thing that stands out to me in this essay (mini-book) is how that statement, so basic and true, can be so difficult to utter confidently, without feeling the temptation to add any qualifiers. The beginning of the essay says as much, with Adiche describing her journey into claiming the noun for herself. The term does have negative connotations. It can lead to uncomfortable, complicated conversations. It’s at the same time convenient and inconvenient. Her path towards claiming the word reminded me much of my own, which I wrote about in the past for Libby’s blog. Since my early days where the most I could say was that I was an “egalitarian,” I have really shifted into advocating for my fellow women and calling out sexism where I see it. 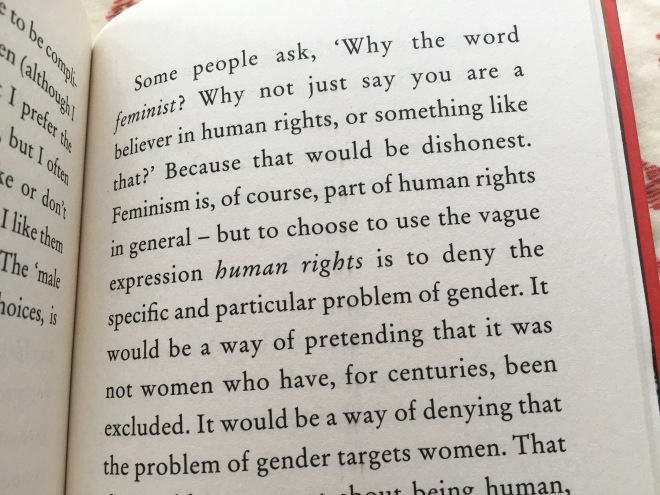 At the risk of touching two hot-button topics in one post, I want to point out the passage above. It is so simple and eloquent and also holds up a mirror to the “Black Lives Matter” vs “all lives matter” movements.

Let’s go back to the title for a moment. We should ALL be feminists. All oppressed people need allies. Women, while not overtly oppressed in the way we have been for centuries, still get the short end of the stick when it comes to safety, job opportunities, sexist media coverage, etc. It is crucial to loop men at all levels into this conversation. My husband will tell anyone willing to listen why he is a feminist. He raves about how many members of upper management in his company are women. His journey has been inspiring to me and makes our life journey together stronger.

What a day to tackle this post. Hillary Clinton has just become the first woman to be nominated as a Presidential candidate by one of America’s two major parties. (Notably, the Green Party and others have had female candidates in the past). Not having a major candidate has frustrated us (women) for years, yet the political pipeline is still lacking in volume of qualified candidates. Bit by bit, this is changing. Women who were in high school and college during the heady “grrl power” days of the 90s are hitting a good stride in their political careers. We are seeing more women at various levels elected office. This trend must continue!

I’m going to keep this short since the source material was short. Instead of reading my thoughts, read the mini-book (it will only take about 3o minutes) and let me know your thoughts in the comments. If you’d rather listen instead of reading, you can listen to the TedxTalk (which was closely adapted into this book) here on YouTube.

Truly, I feel like I covered most of what I think about gender roles (and lack thereof) and feminism in the piece I wrote for Libby this spring. I’m still proud of it and I will still talk anyone’s ear off about how my husband is a feminist and what it’s like to be in a feminist marriage.

ook for August will be The Book of Unknown Americans which has been on my “to-read” list for probably about a year now. Over the past two years I’ve been making a concerted effort to read highly reviewed books by writers of color so I couldn’t be more ready to tackle this. This NYT review from two years ago sounds like it could have been written today. So excited Steph suggested it! As always, you’re invited to read along and discuss your thoughts during the month or at the end of the month on one of our respective blog posts!

Last weekend, a bunch of our friends went to Palm Springs but we backed out at the last minute due to logistics and such. We had a little in-town date though, at a buzzy new restaurant called Pokiritto. I guess a poke bowl is kind of like a deconstructed sushi roll? And a sushi burrito is… woah, big. I loved it. But, I’d just as soon go out for normal sushi. Afterwards we crossed the street to Iceskimo and got some snow ice, which is kind of like if a snowcone had a baby with frozen yogurt.

This weekend, we’re having a small garage sale. Keep your fingers crossed that we can get a little cash!

I finished reading Ready Player One (our May book club selection) but there is still time to read if you’d like to join us! It’s upper-YA, so, a pretty quick read once you get into it.

Bryan Singer’s X-Men movies are so thrilling! Until Christopher Nolan’s Batman trilogy came along, they were my favorite superhero movies… but what if the story of the X-Men had been directed by Wes Anderson?

All the shows we watch during the normal cycle have finished (wasn’t the season ending of New Girl sweet?) so to fill in the gap we have started watching Angie Tribeca on Hulu. If you like on-the-nose style of comedy like the movie Airplane! then you’ll like this.