It’s a great day for an open house! I’m at Upper Voltaire from 10-2 😄 #realtorlife #coldwellbankerwest dre#02053871
There is a lot going on this weekend! What are you up to? Anything I should know about? Drop your weekend plans in the comments ⬇️
Mosey wanted to show you the @eddiebauer coat he got for Christmas. He has next to no hair so his outerwear collection has grown to 2 sweaters, a hoodie, and this comfy fleece wrap. #chillydoggo @onlylongdoggos #moseygram
Finished out last week by trying a new neighborhood spot. @skabarsandiego opened up on Adams Ave not long ago. They serve up Asian inspired food and drinks in a beautiful, fresh, bright atmosphere. #sandiego #normalheights #sandiegometro #abnormalheights
If I’m being honest, one major perk of a career in real estate is open house food. #🥧
BRR! The crisp fall air didn’t keep me away from touring the 4 incredible penthouses at Savina yesterday. Glad I had my fleece to keep me warm on the fresh 36th-floor balcony. Check out these jaw-dropping views... 👀
90° on Monday and 60° + rain today. I’ll take the variation as long as we get back to our regularly scheduled sunshine next week. ...Oh? You say my last Instagram was also a picture of a latte on a Wednesday? Should this be a thing now? #lattewednesday #basic
Exploring One Paseo this morning #northcounty #onepaseo
Find me here 🐉☕️
Out Of Office never looked so good - My first time planning travel dates specifically for a holiday like Dia de los Muertos, and it was great. 🇲🇽😎✨
Ahhhh 😍 more of this beaut on my insta stories today!
Shared an amazing mid century condo in this building a couple weeks ago and SO many people wanted to know more info about it!! What other kind of homes do you want to see in my stories? I wanna give the people what they want! Leave a comment below ... 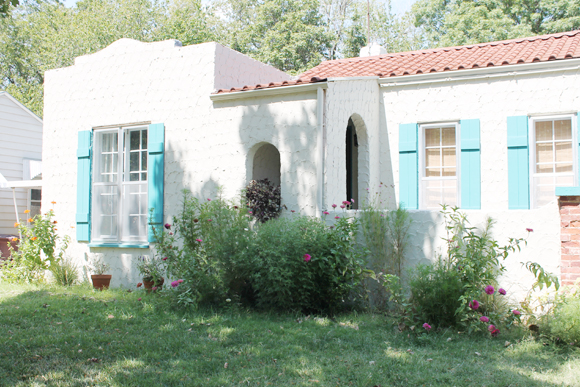 The most recent photo of our exterior

Living in the hacienda marked our first year of taking care of a yard of our own. So here are some reflections–including a few contributions by Doug as well.

One good thing about this winter is that it was comparatively mild. We didn’t get any blizzards or snowed-in days. Unfortunately, this meant that the leaves took forever to fall, little by little. Our street is filled with old houses and mature trees– this translated into LOTS of leaves for a long time, since each species of tree dropped leaves at different times. We must have taken a pickup-bed full of leaves to the dump at least five times throughout the fall and winter!

One–we didn’t have to buy a snow shovel since the previous tenants had left one in the garage. WINNING! Two–we only had to use the snow shovel but once or twice since the winter was extremely mild. I was expecting the worst since in February and March 2011 my car got totally buried a couple of times.

I’m so happy for this fact. If it were up to me, I’d mow once a month. However, beginning in March-April, Doug started mowing the lawn when he got home from work every Friday (to get it over with before the weekend). Being a sports buff, he liked mowing it on the diagonal to make it look like the sports fields he’s seen on TV since he was little. To mow our “back forty,” the section beyond the wire fence) he had to awkwardly/sneakily cut through the neighbor’s carport so he only mowed that every 2-3 weeks. That section of the yard isn’t used at all, and is mostly weeds, but chopping everything down to an even level every so often really made it look nicer.

Chalk it up to laziness, but I never saw the reason Doug pulled out the weed-whacker every time he mowed as well. (Eventually, the edging was reduced to every 2 weeks–once it got ridiculously hot). Again, if it were up to me, I would not have edged a thing! Truthfully, I could tell a big difference after edging and I’m glad he took the time to do it (even if he had to buy two extension cords to get all the way to the sidewalk!).

Back in March, we were shocked when a bulb came up all on its own. So I got all excited and planted a few packets of seeds I picked up from Wal-Mart for just a couple bucks each. Much to my surprise, around May, flowers started coming up!! I had seeded really really heavily since I was suspicious of them being picked up by birds or not beginning to grow at all. Big mistake. I really should have put them down with more thought and purpose. Turns out, lots of them grew and eventually ended up crowding each other out. We had to pull out all the poppies in August since they were yellow and withered, and eventually pulled out the cosmos and zinnias too.

You can read about our (not-so-exciting) mulching adventures here. The bed looked fantastic until the cosmos and zinnias went crazy, got insanely tall (the zinnias over 5 feet!) and the bermuda grass started coming back through as well. If we had taken the time to weed a few times a week, we might have been able to keep it at bay, but temps were regularly over 100 this summer–and didn’t cool down in the evening like this California girl is used to!! I was not going to spend time out there. Oh, and did I mention how my body overreacts to mosquitoes? No, thank you. I’ll stay in and let the bermuda grass come through.

Growing up, my parents always had underground sprinkler systems (that they installed themselves!) that made watering a no-brainer. To be honest, I didn’t notice a huge jump in the water bill like I’d been expecting, but hooking up the hose to the sprinkler and moving it around the yard was a huge pain. Not to mention, forgetting it was on at all! Some sections of the yard really benefitted from our forgetfulness. Doug and I had a standoff regarding how much/often to water, and we eventually compromised with watering most days–but not until the sun had started going down. Being a drought-conscious SoCal girl, it is heresy to water during peak/daylight hours (but people in our town do it all the time!!).

Do you remember any impressions you had from the first time you had your own yard? I’m glad we had this experience but, honestly, it’s a relief that we’ll be moving into an apartment complex with professional gardeners!

Hold on to your hats, this is going to be one outrageously exciting post about mulch.

Okay, okay, that’s overstating it. A lot. The truth of the matter is, mulch makes things a lot more attractive, and I was a skeptic until recently. I thought it was just to look pretty, but after reading a surprising number of blog posts on mulch this time of year, I decided we better get on the mulch train! (The ticket for the Mulch Train was only $2.88 a bag, by the way, so I’m on board!)

Supposedly, mulching around your plants is supposed to lock in moisture and keep weeds at bay. Well, the weather is getting hotter so locking in moisture sounds A-OK to me. Weeds? Goodness gracious. I think we have more irritating creeping grass in our flower bed than the flowers that we want in there. As a side note: anyone studying Political Science and wants to know what is really meant by the term “Grass Roots” is welcome to come assist me with yard work. (Cliff’s Notes version: They aren’t deep, but they are made up of a thick, fibrous network, and very, very irritating to pull out.)

Anyway, after a couple of hours of pulling grass out of the flower bed (once ya get started it’s hard to stop attacking the ugly and annoying weed) we decided to run to Wal-Mart to get a couple bags of mulch. They had two types, cedar (which is what we got) and um, something else (that was much redder in color). Like I said, we got two bags of cedar since we’d only pulled about half of the bed.

We watered the now more-or-less de-grassed soil and the plants before putting the mulch down. There wasn’t a ton of rationale behind it, but since it claimed to lock in moisture we wanted to pre-moisten the area I guess? Then, While I continued to pull out grass around our California Poppies at the front section of the flower bed, Doug started spreading out the mulch. Then we watered again.

It smells fantastic! The red hue makes the plants seem greener than they were before, and my lawn smells like a Home Depot now. I really like it! As soon as we get the whole thing finished (I think we’ll do it on Friday) I’ll share a wide shot of the house and lawn for you. Maybe this infusion of a reddish hue will balance out the terra cotta roof? Mostly, I’ll be interested to see if it really does deter some of the weeds coming up.

Working in a yard is not as intimidating as I originally thought, and I might even miss it if we move into an apartment for our next place. However, I do only get the inspiration in “spurts” and am much more inclined to do it as a “fun” activity and not as an obligation. Maybe I’ll miss it, maybe I won’t. For now, it sure is fun playing in the dirt.

Bonus info: The plants we have growing in the “after” picture are, from left to right, rose of sharon, cosmos and zinnias, (grown from seeds!), pampas grass, an empty pot, elephant leaf (I think that’s what it is and it’s hiding behind the thick clump), another empty pot, and another rose of sharon. The clumps in front are all California poppies.