Today I got home from work at 3. I sat down at the computer to relax at 4.

What was I doing during my traditional post-work laze around hour?? 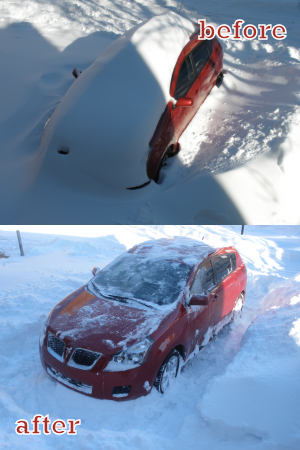 Well, I dug my car out of the snow behind my apartment. With a broom.  Actually, what you see in the “after” picture is after a kind bystander “plowed” around the perimeter of the car with a snow shovel. But everything else was me. I asked if he thought I could back out (me being clueless about these things), and he said it should be “no problem.”

However, there was a problem. I backed out all the way into the alley and became stuck. Spanning the alley. Enter Good Samaritan #2, a man from the post office. He shoveled a little more around the wheels and helped me rock the car out until I could drive out of the alley. Which I’m NOT entering again until the snow is under 5 inches.

Did I mention the “E” light was on the whole time? I thought “great, I’m stuck in the alley, obstructing traffic, and I’m going to run out of gas right here.” Well, I made it to the gas station. And made it back home a little after 4 (I parked like a block away in a cleared parking lot).

Phew. What a cold job. I need to buy a snow shovel if I’m in Kansas next winter.