It’s a mini-tour because the bathroom is pretty small and straightforward. 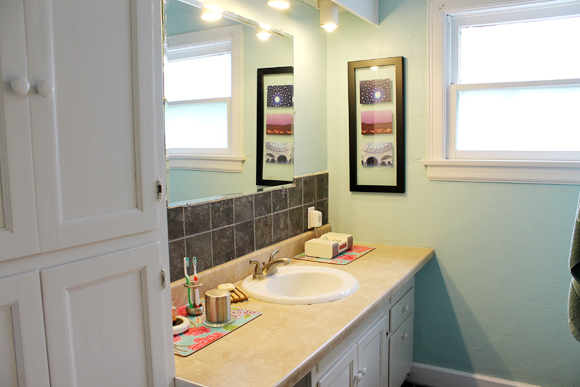 Thought I ought to hop back on the room tour train, since I left off after showing the guest room and the bedroom, so here’s the last piece of the west part of the house. The bathroom. It’s really nothing special, but it’s an awfully important room in the house to have, for obvious reasons. And it definitely could be worse. After having a bathroom tiled in Easter egg colors (right off the living room where everyone could hear your business) this bathroom is a MILLION percent upgrade. Except the other one had a bigger/better/deeper tub. 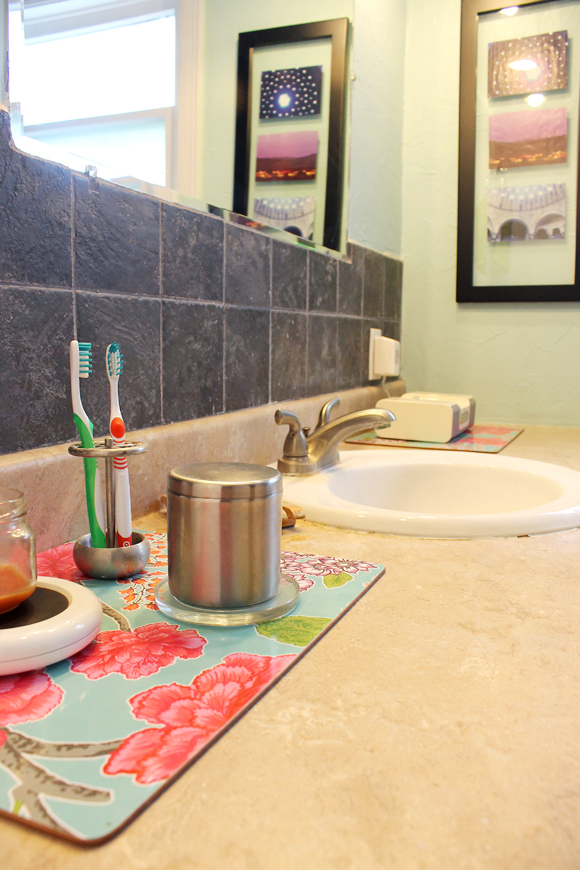 Let’s get started! Mostly I wanted to show off some items I got at a design swap one of my gal pals hosted a month ago (it has been a month already! sheesh!). The colorful placemats you’ll see here are in the bathroom mostly because there were only three instead of four. If there were four I would use them in the dining room for (duh) placemats but I got creative and I love how they bring a little bit of pink in and really perk up the room. They also make it easy to tidy up. They help me tell myself, “Objects do not belong on the tan section of the counter! Hide them in drawers or cabinets!” It’s a little strange, but it works. 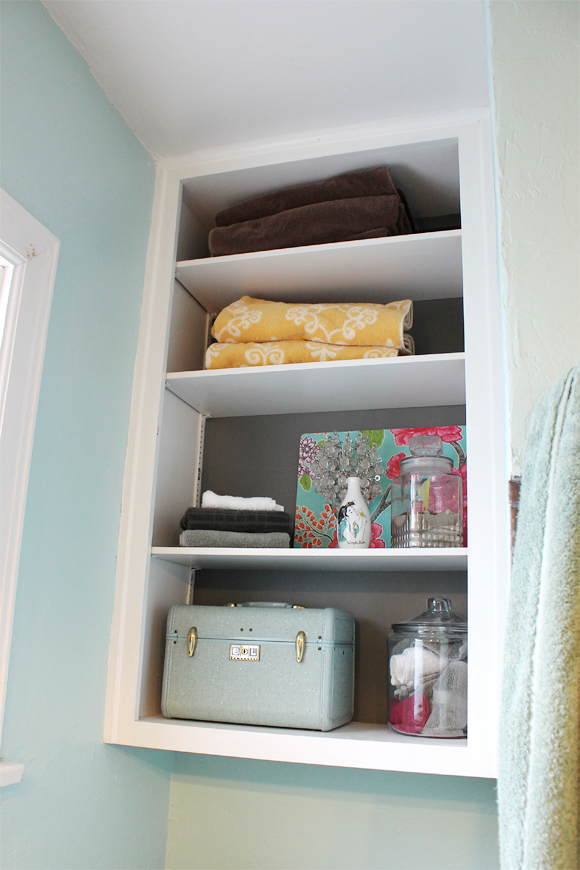 The third placemat got tucked into my open shelves and injects a much-needed little perk. The little sake bottle is from who-knows-where, and is cracked. The jar with sand in it is from our wedding (we did unity sand instead of candles)! My vintage train case made its way to the bottom shelf (much easier for short little me to get it out). The wicker basket (from Target) moved from the bottom shelf to on top the tank: 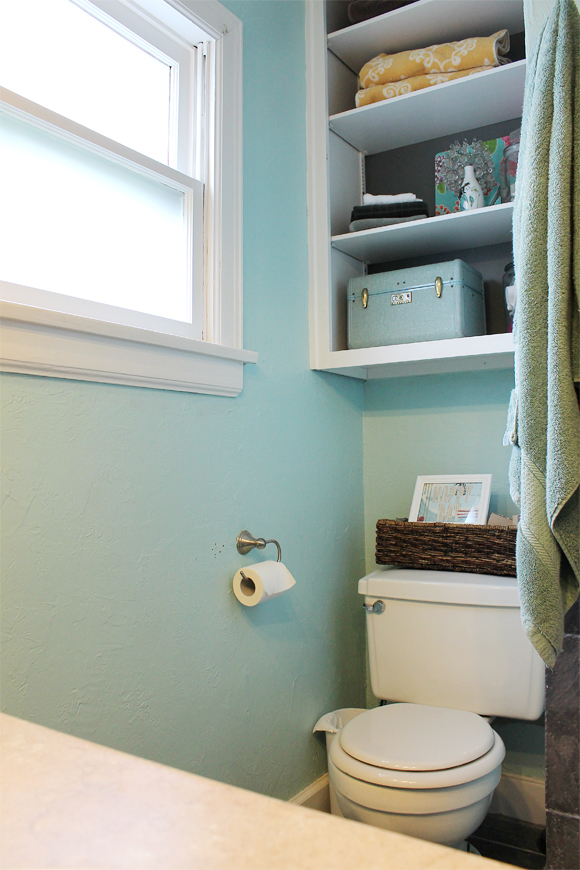 I was wary of putting anything on the tank because right when we moved in I had put a candle there and one night it slid off and shattered. However, seeing that this is much larger and less slippery, not to mention nothing in/on the basket is breakable, this has worked well so far.  The art in the little frame says “Happy Day” and was made by Libby as a housewarming present. :) There is a series of holes next to the toilet paper holder that need to be patched, but does it make it any better if I say they were there when we moved in? Maybe not, since it means we’ve lived with it like that for 8 months… (has it been 8 months already!?) 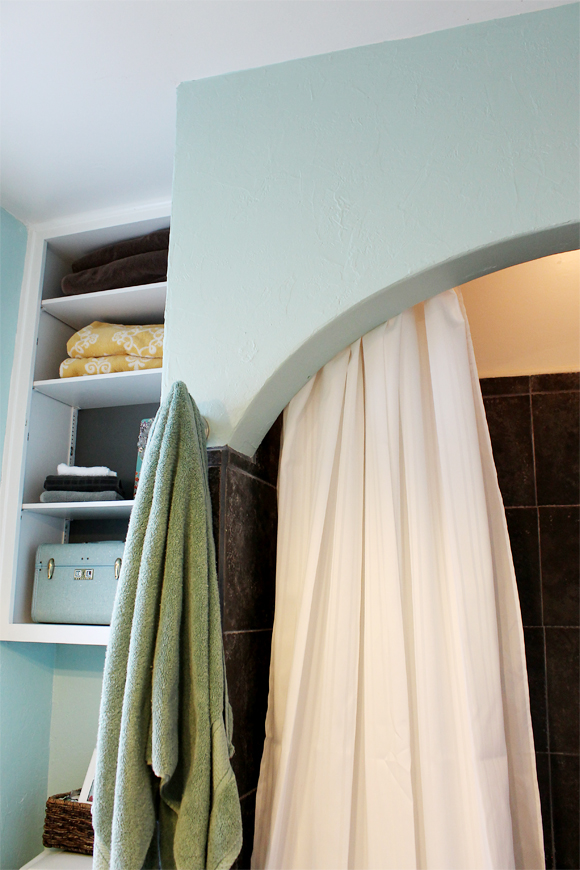 Here you can see the arch that I’m not crazy about, but everyone who comes over comments on how much they like it. Personal preference, I guess. It does tie in with the arched ceilings in the living room and dining room, but personally I fell that closing in the top of the shower like that makes it feel a little claustrophobic.

Last I’ll share two more little details. We have towels practically coming out of our ears, so we have an extra little storage basket (also from Target) below the counter, along with my scale (don’t remind me) and a step stool: 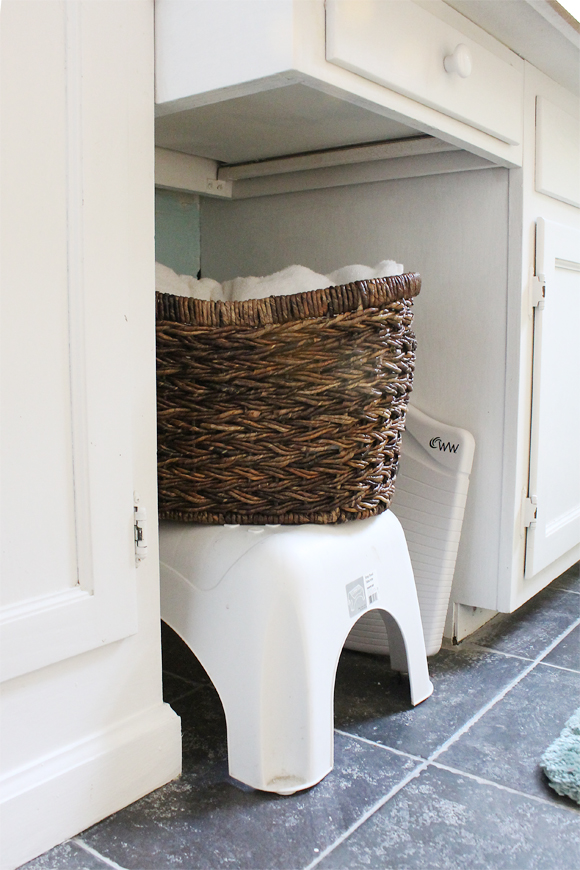 And I really like the art I have in the tall black frame (it’s from Target) so I thought I’d share it with you. They’re photos cut out from a semi-recent Conde Nast Traveler magazine, and all the photos are of spas in the Middle East. It reminded me of my hammam/Turkish bath experience in Morocco and felt appropriate for a bathroom. 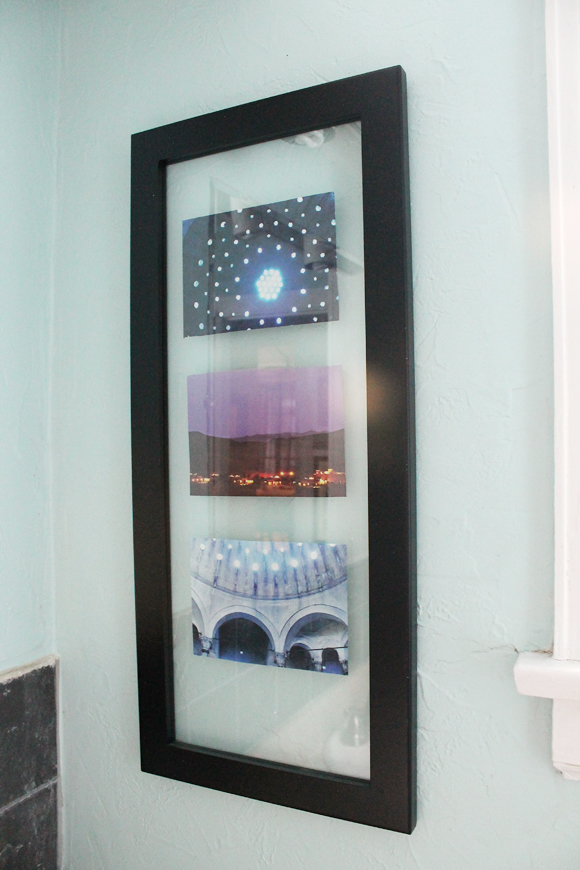 Oh, and the paint color is Valspar’s La Fonda Mirage, the same color used in the kitchen, to not only bring in the Southwestern element of the house, but to save money by only buying one gallon, and to create a sense of continuity within different rooms.

There you go: the bathroom. Short and sweet for what I think is kind of a sweet little room. Did I mention it’s narrow and therefore super hard to photograph?

Remember, you have until Monday July 16 to enter the Scentsy giveaway!